Tips On How To Painlessly Detangle Your Child’s Hair

A child’s hair is completely uncompromised.  It has never been coloured, permed or processed and that makes it finer than adults and more prone to knotting.  Detangling can be a real challenge if you don’t know-how and can cause both you and your child aggravation. A good kids shampoo, conditioner and  hair detangler  is the solution, its a three step process

It’s best if you get the supplies you’ll need ready ahead of time.  You will need a wide-tooth comb or brush, a clip, and a good detangler.  The best leave-in conditioners contain vitamins and proteins to help thicken and strengthen strands. That’s why we recommend MopTops Kids products.  Not only do they contain all of the good stuff, but they are also non-toxic and paraben-free. Lastly, If you’re working with a younger child, it helps if they have a toy to play with or something fun to watch on TV while detangling. You can work with either wet or dry hair, To start, section off the bottom section of hair and clip the rest on top.

Spray each section with a detangler from root to tip.  Once you’ve sprayed the section, hold it firmly and work on the bottom.

Working from the bottom, take small sections at a time and work from the tips to crown, using the wide-tooth comb or brush. This technique enables you to hold the hair with your other hand to prevent tugging and causing pain.  As you work your way up, adjust your hold.

Once you’ve finished a section, unpin the rest and pull down a new section.  If you find you’re not able to brush through a worked section, re-work it from bottom to top.

How to Prevent Tangles

In the shower, use a liberal amount of moisturizing conditioner. While it is still in and evenly distributed, use your wide-tooth comb or brush to work through hair. This will increase manageability with tangles if done on a regular basis.  For really curly locks or stubborn knots, I strongly recommend a leave-in conditioner.  Last, but not least, I always recommend that girls with long hair should sleep with a very loose braid to prevent tangles.

Summer sun can be harsh not only on your skin but also on your hair, in particular blonde hair as the sun, coupled with chlorine and salt can lighten the hair thus making it dry and brittle and in some cases will snap!
The best way to avoid and protect your childs hair from sun damage is to use a UV heat protector.

We highly recommend MopTops haircare 4 kids, the range is made with your kids sensitive hair and skin in mind, MopTops Splash Range, is essential for any pool or beach visit, protection is better than cure every time, this is a 3 STEP PROCESS.

Spray into the hair before exposure to the sun etc for protection against dry brittle hair also helps to keep green hair a bay too.

Will deep clean and put back the protein and moisture that the elements take out and will neutralize green hair..

This shampoo is like a dry clean for your kids hair and scalp, only to be used when swimmer or there is a lot of product build up from hairspray and gels.

Will put back the moisture and condition back that the elements strip out, making the hair easier to manage less knots and tangles.

We know that in its own make up,  curly hair is dry, unruly and can be difficult to manage..  these struggles are real..

Most of the time it’s  the wrong product using adult and supermarket products a big no no,

firstly Adult products are harsh, full of nasties, one  analogy I use,  you wouldn’t use wrinkle cream on you children’s skin? why would you use adult haircare on their hair?  even the kids supermarket products  are full of  the bad stuff they should’nt be on the shelf! the reason Kids/Tweens are not oily until they are Teenages, so drying them out before they have chance to be oily.

curly hair needs losts  of moisture, starting with shampoo conditioner then a detangler, here’s why

Shampoo will cleanse the hair and the scalp it’s important to have a healthy scalp as this will affect the condition of the hair.. the shampoo opens the hair cutical the conditioner closes it  thus conditions and smooths making the hair easier to manage, curly hair only needs washing once a week, detangler  can be used daily to help with bed hair and detangle, never spray with just water as the water will dry out the hair even more,  as the water evaporates this will make the hair frizzy, this is why we use a detangler because it keeps hair conditioned once the hair is dry.

MopTops haircare is a salon exclusive range and designed for Kids/Tweens making it less painful to manage their hair..

they are kind to your Kids/Tweens sensitive skin and hair, made with the finest natural  ingredients with awesome fragrances,   no colours no nasties and proudly Aussie made

I’ve been a kids hairdresser for more than 20 years! I’ve owned a salon, been mobile and now also collaborate with children’s play centres such as Atlantis Play Centre in Clarkson and Darlings Day Out, Wangara in Perth.

So as you can imagine I have seen a lot of happy times and a lot of unhappy times when it comes to a child’s first haircut. And a few tantrums too with some stressed out parents along the way. So I have put together a few helpful hints & tips that have been tried and tested over the years, to help get you ready for this memorable day. 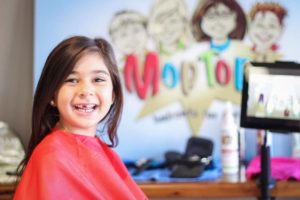 Preparing for you Childs first Haircut

A haircut is new and can be a daunting experience for your child, so be prepare for any tears or fears that may happen on the day. 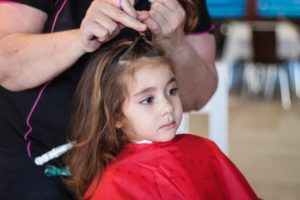 Try to make it a fun time. Say they are coming to get a hair “Trim” and they can play in the centre afterwards as a treat (If they are coming to me) You could even organise a play date and you can have a coffee catch up too!! Great way to catch up with friends at the same time J

> Always comb hair from the bottom to the top

> Use a wide tooth comb or a detangling brush

> Aways use shampoo and conditioner, not a 2 in 1 as they do more damage

This is one of the reasons why we started the Daddy Daughter Hair workshops.

A mum was telling me that her daughter was taken in to hospital and had to stay in, she called her husband to ask him to bring in an over night bag for their daughter, the Mum said she was unpacking the bag and at the bottom of the bag was a plastic bag with all the hair stuff to do a reindeer sock bun that he had learnt to do at the last workshop! the mum said, she thought why did he put that in.

With a puzzled look on her face, so as she took this out of the bag her daughters face lite up the room and smiled at her daddy which in turn made her daddy smile, that right there was their connection, it was so heart warming, the mum then said that dad the got to work and recreate the hairstyle that he had learned at the daddy daughter hair workshop, to say it caused a stir in the hospital was an understatement, one of the nurses came into the room and said wow!! i love your hair did your mummy do that and with the biggest beaming smile she said no! my daddy did it! the pride on my daughter and hubby’s face was priceless! the nurse then called some of the other nurses to come and look at her hair, they couldn’t believe that daddy had done this wonderful hairstyle and we owe that moment to them going to the Daddy Daughter Hair Workshop!

Joondalup: fathers and daughters can pamper each other at fundraiser

So cool for one of our awesome Daddy&daughter duos featuring in the community news paper this week, big thank to Dad Ian and Abby great job!

Its amazing to see all these Dads wanting to get involved in their girls world and for a great cause, hats off to you all!! Read all about it

During the week, Tapping roof tiler Peter Waldock is a typical tradie who enjoys a banter with the lads.

So, he admits his workmates would be surprised to see him on his days off, hairbrush in hand, perfecting intricate braids.

But Mr Waldock only needs to see the smile on his six-year-old daughter Courtney’s face to know swapping power tools for de-tangling spray is a worthwhile decision.

“It’s been awesome,” he said. “I’ve been doing a lot of stuff with my son and his sport so I just thought it’d be something good to do with my daughter.

“I think it was one of the best thing you could ever do as a dad and daughter with the bonding time that you get.”

Noticing an increase in working mums and single dads, hairdresser Christine Gaskell started the classes to give dads the confidence to take charge of the school runs as well as special occasions, including dance classes.

At weekends, Ms Gaskell’s Carramar home salon is filled with the heartwarming and sometimes comedic scenes of dads getting used to negotiating partings and hair elastics.

About eight dads attend the classes every fortnight.

Starting off with brushing techniques “to avoid whiplash”, they soon progress to elaborate buns and festive hair-dos.

While the results might take a few weeks to achieve, it’s the quality time which is the focus, with dads dedicating the morning’s session to much-needed one-on-one time with their daughters.